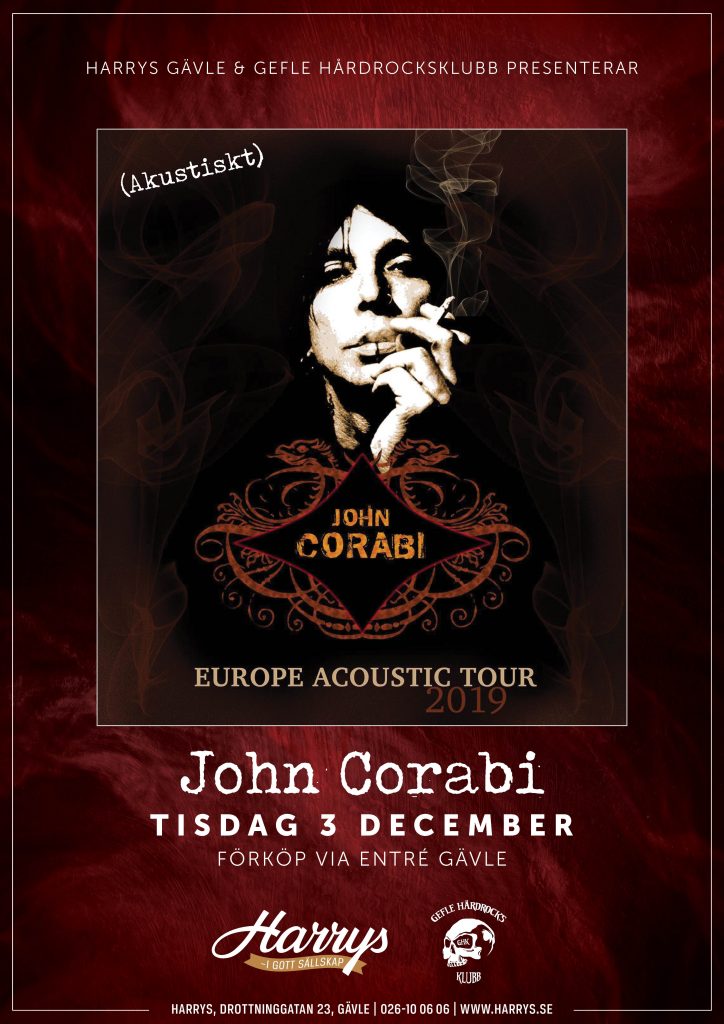 John Corabi has been writing, singing, and performing for over twenty years, and his recordings continually foreshadow where the industry is headed.

John Corabi first came to our attention with a band called Angora.  Upon bursting onto the L.A. scene in the late eighties the band quickly garnered the attention of local club goers, music fans, and L.A. radio.  Unfortunately, the band soon fell apart after winning several awards, including “Best New Club Act.” John quickly rebounded, and formed the Scream.  The Scream album took off, and featured three singles.  “Man In The Moon”, “I Believe In Me”, and the reflective ballad “Father, Mother, Son.”  All of which saw airplay on MTV.  The Scream toured for a year behind the album, and many other songs from the recording found new life on the stage, including “I Don’t Care”, a hard hitting crowd favorite.  John Corabi had caused such a stir with the material he had written with the Scream that newly singer-less Motley Crue took a serious liking to him.  It seemed that the Crue was heading in a new direction, and they wanted John to lead them.

After several months of writing sessions John Corabi joined Motley Crue. The resulting album was arguably the best recording that the band had ever produced, and the band felt strongly enough about the material to name the album Motley Crue.  Songs like “Hooligan’s Holiday”, “Misunderstood”, “Smoke The Sky”, and “Power To The Music” were just a few of the incredible songs that the album consisted of, all of which were co-penned by John Corabi, music and lyrics.  The album went platinum in the States, and enjoyed much bigger success elsewhere around the world.  The sound of the new Crue was like nothing that had come before it.  It gave us a glimpse of what bands like Godsmack and System Of The Down would usher in as “New Metal” close to seven years later.  Surprisingly, after a tour of the States, the band retreated to the studio to begin writing a second album, which would never see a release.  A year into production the band decided to regroup with their former lead singer, but John was not about to give in.

John partnered up with long time Kiss guitarist, Bruce Kulick.  The self-titled debut from the aptly named, Union, quickly attracted air play at the college and rock radio level.  With songs like “Old Man Wise”, “Love I Don’t Need It Anymore”, and “October Morning Wind”, Union found itself winning the Metal Edge magazine reader’s poll award for best new band of 1998.  One review even stated that “October Morning Wind” was the song that Led Zeppelin never got to release.  Union soon delivered Live In The Galaxy, a live album featuring many of the songs from the first record, and live version of songs from John and Bruce’s past.  Including amazing versions of Cheap Trick’s “Surrender” and the Beatles’ “You’ve Got To Hide Your Love Away.”  The live album was soon followed with an album that showed amazing growth in their song writing, The Blue Room.  The band hit the road again, and found that many clubs were selling out.  Songs like “Do Your Own Thing”, “Hypnotized”, “Dead”, and “Who Do You Think You Are?” quickly became crowd favorites and stage staples.  The Union sound would have fit perfectly next to Nickelback or 3 Doors Down, but radio hadn’t yet discovered those bands.  Again John Corabi found himself ahead of the curve, too far ahead for much of the industry. Union continues to play shows all over the globe.

In addition to his continued work with Union, John Corabi joined Ratt as their rhythm guitarist in 2001 and was singing with Cardboard Vampyres, featuring Alice In Chains guitarists Jerry Cantrell, and Billy Duffy of the Cult.  John is also part of ESP featuring Eric Singer and Bruce Kulick of Kiss and Chuck Garric of Alice Cooper.

John Corabi has recorded his long awaited solo album, entitled “John Corabi Unplugged” and continues to evolve. Being released  in Europe and in Early 2013 in the United States, it promises to be more powerful music from one of the best singer, song-writing, frontmen  the industry has ever seen.